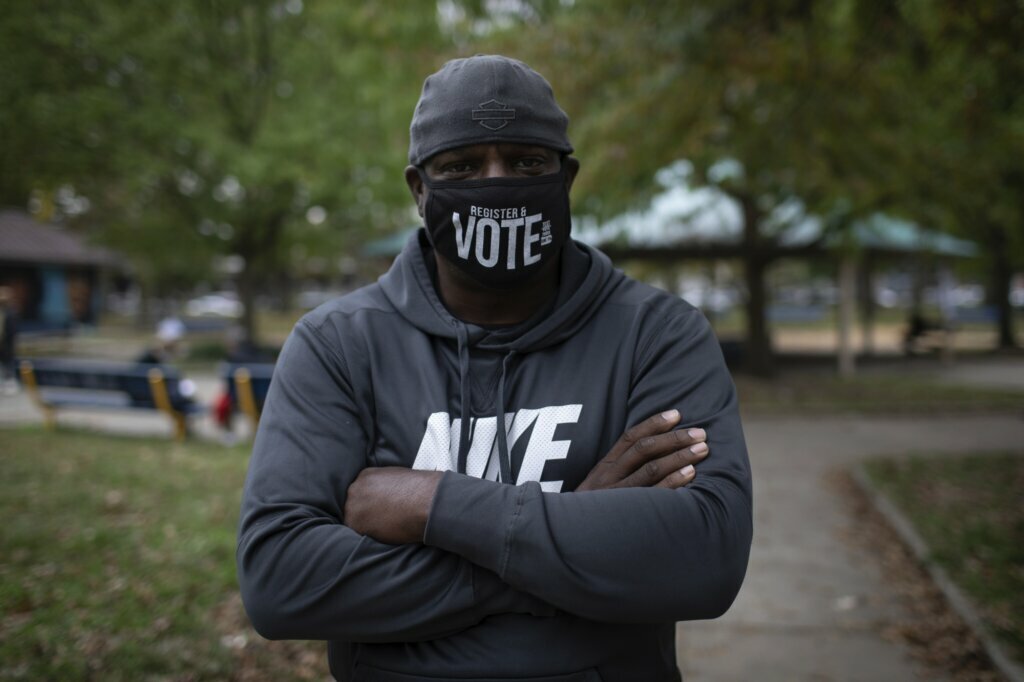 The fatal shooting of another Black man on America’s streets by police — with subsequent unrest — has brought the fraught issues of policing and racism in the nation back to the fore of the presidential election in its closing days.

PHILADELPHIA (AP) — The fatal shooting of another Black man on America’s streets by police — with subsequent unrest — has brought the fraught issues of policing and racism in the nation back to the fore of the presidential election in its closing days.

Philadelphia police say Walter Wallace Jr., 27, was shot earlier this week in the throes of a mental health crisis after he ignored officers’ repeated orders to drop a knife.

The encounter, caught on video, spurred violent unrest in Philadelphia, and now has both President Donald Trump and Democrat Joe Biden calibrating how to address some of the same questions that roiled American cities — and the presidential campaign — earlier this year as they negotiate the end game for a race in which Pennsylvania is a critical battleground.

In Philadelphia and its suburbs, voters are weighing how to factor the issue into their election calculations.

Trump, while campaigning Wednesday in Arizona, expressed outrage over the violent protests in Philadelphia and attempted to use it to court suburban voters outside the city and elsewhere.

“I can tell you, Biden and Harris stand with the rioters and the vandals,” Trump said of the former vice president and his running mate, Sen. Kamala Harris, during a campaign rally. “I stand with the heroes of law.”

In a separate exchange with reporters earlier in the day, Trump spoke about the shooting in purely partisan tones, noting that the unrest had happened again in a “Democrat-run city.”

“They should be able to handle it themselves,” Trump said, even as he suggested that he stood ready to deploy federal troops to Philadelphia if asked.

Biden, who has tried to keep his campaign squarely focused on the pandemic, tread carefully. He initially skipped any direct mention of the Philadelphia shooting as he spoke at a drive-in rally in Atlanta on Tuesday, even as he intoned the names of George Floyd, Breonna Taylor and Jacob Blake — all Black Americans Biden said “will not soon be forgotten.” Floyd and Taylor were killed and Blake grievously wounded in high-profile encounters with police.

Later Tuesday, the Biden campaign issued a joint statement in which Biden and Harris said that Wallace’s was “a black life that mattered.”

Biden and Harris spoke strongly in condemning the unrest.

“We cannot accept that in this country a mental health crisis ends in death,” they said.

Biden reiterated his opposition to the violent protests in remarks to reporters Wednesday, saying that “there is no excuse whatsoever for the looting and the violence.”

He also said he’d set up a commission, if elected, to study “how you diminish the prospect of lethal shootings in circumstances like the one we saw.” Biden’s criminal justice plan would increase oversight of police departments and offer funds to support police reforms at the local level.

But Royster, who is Black, also said Biden and Harris have work to do to show their support for the Black community. Harris, who served as California’s attorney general and San Francisco’s district attorney before being elected to the Senate, is viewed by some in the Black community with some suspicion because of her prosecutorial background.

“I think the community wants healing, but they are also desperate for a change,” Royster said.

Amid this summer’s protests, Trump repeatedly sounded a “law and order” mantra. He received the support of several police unions, while repeatedly warning that the suburbs would disappear if he’s not reelected because of some Democrats’ support for building low-income housing in suburban communities.

Trump also faced bipartisan outrage after Attorney General William Barr ordered protesters forcibly expelled from Lafayette Park near the White House in June. The park was cleared shortly before Trump walked to nearby St. John’s Church to pose for cameras while holding up a Bible. The church had been damaged earlier by a fire amid the protests over police brutality.

In Delaware County, one of the suburban Philadelphia areas where Trump needs to win over voters to keep Pennsylvania in his column, there’s been mixed response to Trump’s hard-edged law-and-order message.

Kevin Hayes, a sales representative who is white, had a handful of Trump campaign signs in the yard of his Springfield home and a “Cops for Trump” sign in his window. He said he “absolutely” agrees with Trump’s characterization of the Philadelphia protests.

“I think it’s terrible the way they’re treating police in Philadelphia right now. They’re not getting any support from the politicians, from the public,” Hayes said. “If they have issues with the police, they should give them more money for training, not defund them.”

Scott Brady, 49, another white Springfield resident and Trump supporter, voted for Democrats for most of his adult life, but backed Trump in 2016. He plans to again this year, and says Trump’s statements about Philadelphia are spot on.

“He’s right. He is,” Brady said, adding that he disagrees with the policies and criminal justice changes advanced by some of the city’s Democratic leaders.

Rick Pierce, a south Philadelphia native who moved to the suburbs a few years ago, was a rock-ribbed Republican but says Trump has tried his patience over the past year. The 65-year-old retiree said he voted for Trump in 2016, but he’s had a change of heart this year.

Pierce, who is white, said he understood why people were upset by Wallace’s shooting.

“By now the police should know better,” he said. “He didn’t have a gun, he had a knife.”

This story has been corrected to show that Jacob Blake was grievously wounded in police shooting, not killed.